Ori and the Will of the Wisps Review – Costly Ambition

It’s been five years since Moon Studios’ Ori and the Blind Forest blew me away with its excellent, almost wordless storytelling, beautiful animation and images, and challenging but satisfying platforming. My anticipation for its follow up only ramped up as its release day drew near. In all honesty, I...

It’s been five years since Moon Studios’ Ori and the Blind Forest blew me away with its excellent, almost wordless storytelling, beautiful animation and images, and challenging but satisfying platforming. My anticipation for its follow up only ramped up as its release day drew near. In all honesty, I probably would have been happy with more of the same but Moon Studios decided to expand upon their remarkable work and made Ori and the Will of the Wisps not only a worthy follow up, but in some ways, it surpasses Ori’s first adventure.

The story is simple but it does require some basic knowledge of the first game for the following names to make any sense to you. After the events of Ori and the Blind Forest, Kuro the owl’s egg has hatched and out comes Ku. Born with a damaged wing, Ku is unable to fly like the other birds in the world of Niwen and it clearly upsets Ku. With a feather from Kuro, Ori’s friend Gumo attaches it to Ku’s damaged wing which eventually allows Ku to flow. Ori and Ku set flight around Niwen as a storm strikes, causing them to be separated. Now Ori must go on this adventure, explore Niwen and find his friend.

Like the first game, the story presentation remains far and way the heart of the game. Ori and the Will of the Wisps is largely told through gorgeous images and beautifully made animations. Every emotion is felt in how the characters physically behave and interact, without a word spoken between them. Within the first five minutes, it’s clear what these characters mean to each other and what the stakes are. As Ori meets friend and foe, the story really does pack an emotional punch and more than once l said “No!” out loud in reaction to something that happened. It’s really impressive how Moon Studio is able to get me to feel that much through nothing but visual storytelling. They are damn good at what they do.

Visually, Ori and the Will of the Wisps looks very similar to its predecessor. It’s a stunning, colorful blend of 2D visuals with a 3D sense of depth that really makes every frame look like a painting. Things move in all plains making the world really feel alive and a character in an of itself. Each area has its own unique look making them all have their own personality. They do manage to contrast each other but never feel like they aren’t all part of Niwen’s beautiful and perilous world. 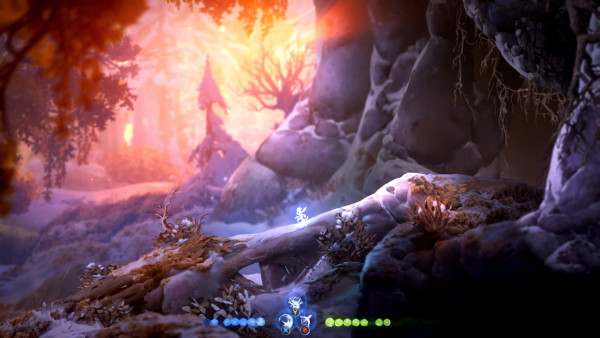 In Will of the Wisps, the map is every bit as big as that of Ori and the Blind Forest, and each offers familiar and unique challenges. Getting through these challenges requires abilities and they have brought back a few like Bash which allows you to launch off of enemies and lanterns, Dash which allows Ori to a quick speed burst to allow Ori to cover a further distance and Water breath which allows Ori to breathe underwater indefinitely. The game also brings on a heap of new powers and abilities that make the game a lot more fun and honestly, easier than the first. These include Light Burst, a flaming ball that Ori can shoot at enemies but also can be used to Bash off of to reach higher platforms. There is also Regenerate which allows you to use Energy Cells to regain health. Despite making the game easier, they’re very much welcomed.

In Ori and the Blind Forest, I died 513 times (both games feature a death counter). In Ori and the Will of the Wisps, I died 154 times. And most of them were in the last three areas of the game, which I will get to later. Making up the difference in this game can easily be attributed to the addition of melee and ranged combat. This time Ori has a few weapons at his disposal. The starting weapon is the Spirit Edge. A sword-like weapon that is quick to hit and does okay damage. Later on, you can purchase the Spirit Smash, a giant mallet-like weapon that does significantly more damage than the Spirit Edge but is much slower. Personally, I chose the damage output over the speed once I was able to make the choice. Additionally, Ori has the Spirit Arc, a bow and arrow, and Spike which is a spear. These require Energy Cells as ammunition so they’re best used sparingly relative to the limitless times you can swing the Spirit Edge and Smash.

Ori and the Will of the Wisps also introduce Spirit Shards. These are collectibles that can change things like your damage output and intake, make the Spirit Arc rapid-fire, allow you to stick to walls as opposed constantly having to jump up to them (I used this the entire game since you get it pretty early). Fighting and beating the waves of enemies at newly unlocked Combat Shrine will give you another Spirit Shard slot so you can stack them and mix and match as you see fit. 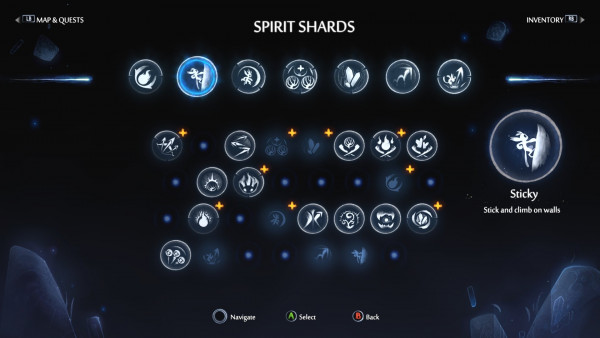 Also making the game much easier is the checkpointing system. In the previous game, Ori could spend an Energy Cell to create a checkpoint pretty much anywhere, however in Ori and the Will of the Wisps, there is a pretty generous checkpointing system that will autosave fairly regularly. Back are the Spirit Wells where Ori can replenish his Energy and Health, as well as acts as a save point. However, and this is probably the most welcome change of all, the Spirit Wells are fast travel points. Something that was completely missing from the first game. You can warp to any one you’ve activated at any time and this makes the whole experience much more enjoyable overall without having to backtrack to areas over and over.

It’s Not All Sunshine and Spirit Trees

While combat and the ability to fast travel definitely makes the game easier, Ori and the Will of the Wisps is still without its difficult sections that can lead to some frustration. Unfortunately, an unwelcome (for me) holdover from the first game, Will of the Wisps still has escape sections that rely on either extreme pre-cognitive abilities to see what danger or obstacle lies ahead of you or a frustrating amount of trial and error. The frustration mileage may vary from player to player, but as someone who can’t stand repetition, these are my least favorite sections in the game. 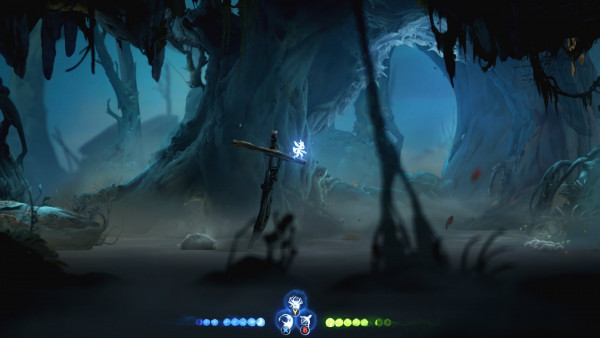 To accompany the added melee combat are boss fights. There are six bosses in the game to fight (not including the escape sequences which don’t require combat) all varying in difficulty. Most of then weren’t too much trouble depending on how leveled up you are and which abilities you have unlocked, however, the final stage of the final boss really tested my patience. That is until I found a much easier way to deal with it using an ability I didn’t consider the first six or seven times. Once I used it, I got through the fight in two more attempts. The boss fights tend to break up the pace of the game and feel more like a war of attrition rather than a fun addition to Ori’s formula and subtracted a tiny bit from my overall experience.

It’s clear Moon Studios had higher ambitions for every aspect of the game. The care shows through in every animation, the level, and sound design’s score. This ambition does come at a price, however. Surprisingly, even on my Xbox One X the game does suffer from some slowdown after long periods of play and on more than one occasion the game would literally freeze moving from one location to the next. Even requiring me to quit the game and restart. I will note that when I started quitting to the menu after I was done playing for the moment these problems did subside. 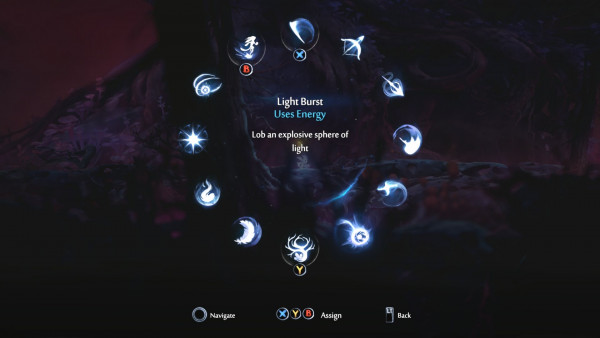 Ultimately, Moon Studios could have rested on its laurels and just made more of the same but it’s clear they wanted to make a sequel to Ori and the Blind Forest that will feel familiar for fans of the first game while also expanding on their already stellar formula. Ori and the Will of the Wisps does everything a sequel should do. Give you more of what you love, while bringing new ideas. The scope of that ambition comes with some technical issues I wasn’t expecting on an Xbox One X. I also wasn’t a fan of the trial and error of the escape sequences returning and felt the boss fights didn’t bring enough new to make them truly stand out. The overall experience I had playing Ori and the Will of the Wisps was moving, addicting and most importantly fun.

Copy purchased by the reviewer